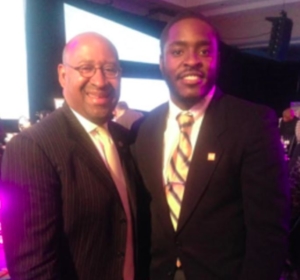 “Anyone can speak on all the things that are wrong in our communities, but it takes a certain individual to seek a position where they can change the way things are and make things better for the youth to flourish and thrive.”

During his time with PowerCorpsPHL, Kalef Jones rose from general member, to Assistant Crew Leader, to Associate Crew Leader, to eventually becoming the first Corps alumni to be hired as a full-time crew leader on staff.

Kalef enrolled as an AmeriCorps member at PowerCorpsPHL in March 2014 on a referral from the Youth Violence Reduction Program. At the time, Kalef says, his “life was in shambles” and he was beginning to lose hope in the future. His mother had just passed away from heart disease and his sister had moved to Seattle, leaving Kalef with little structure or motivation.

“Prior to PowerCorpsPHL, I was what you considered a ‘waste of talent’,” said Kalef. “I didn’t know my purpose in life or what I wanted to do. I didn’t have any ambition, goals or direction.

Once in the Corps, Kalef began to feel optimistic and appreciated. He knew he was in the right place. His supervisors note that, though Kalef had experienced major life setbacks, he was mature enough to acknowledge his issues and openly work through them with his peers and program staff. He began using his own experience as an anecdote to motivate other Corpsmembers. One staff member in particular who worked with Kalef during these hard times said, “I felt like Kalef was a colleague before he was a colleague. Even though I was his supervisor, it felt like we were professionals, both learning from each other.”

Kalef has earned a great deal of recognition for his service and leadership: as an Assistant Crew Leader, he won PowerCorps’ Organic Leadership award and won the Outstanding Youth Partner award from his sending agency, The Youth Violence Reduction Program. As an Associate Crew Leader, he completed the Corps’ first ever internship with the Mayor’s Office at City Hall, and served as a featured speaker in a My Brother’s Keeper lecture series. He has consistently gone above and beyond, helping with optional after-hours and weekend service projects. When he put in his name to be considered for a Crew Leader position, nobody on the hiring committee had any trouble promoting Kalef.

Using skills he gained during his 18 months of AmeriCorps service, Kalef now leads a Green Stormwater Infrastructure crew. He takes the mentoring aspect of his leadership position very seriously, striving to build camaraderie among his Corpsmembers and maintain a professional atmosphere where everyone is focused on learning and bettering themselves. Two of PowerCorps’ current Assistant Crew Leaders account their success to Kalef’s constant coaching. As fellow staff at PowerCorps say, “We are nominating Kalef not only for this level of commitment, but also for his humility and desire to constantly be better while serving.  His outlook on like and service has impacted so many.”

Kalef plans to use his AmeriCorps Education Award to attend college and study non-profit management. He eventually sees himself in politics, where he can take a stand against violence among young black men.

“I need to lead by example in the most positive way,” said Kalef. “Anyone can speak on all the things that are wrong in our communities, but it takes a certain individual to seek a position where they can change the way things are and make things better for the youth to flourish and thrive.”

Jasmin Angeles on being a Role Model