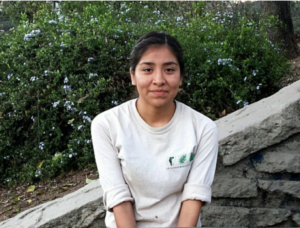 “I want to be someone who makes a difference for the younger generation, and who stands for what is true and right. I want to help others understand that when an opportunity comes their way, it’s important to improve themselves and take it.”

Corpsmember Jasmin Angeles grew up with her three siblings and their parents, both of whom are originally from Mexico. Throughout her childhood, Jasmin’s family was very involved in the church; she and her siblings attended a private Christian school and all of her parents’ decisions were based off the fundamental principles of their religion. As time progressed, Jasmin’s parents could no longer afford private school and the siblings were forced to transfer to a public school.

At her new school, Jasmin started hanging out with girls who were chasing boys. This, coupled with Jasmin’s lack of direction, was a recipe for an unfavorable future. As the years went by, Jasmin’s family started to stray away from God and the fundamental Biblical principles that had guided their lives. During her last year of junior high, Jasmin was abused by the one person that she looked to as a role model: her father. She was confused, felt betrayed, and couldn’t understand why he would hurt her. This incident inevitably tore Jasmin’s family apart.

As a result of the domestic violence, Jasmin was put into foster care and eventually moved in with her aunt. Jasmin’s aunt was dependable and supportive throughout the long process of reconciliation and recovery. Eventually Jasmin had the strength to forgive her father for his abusive actions. Her father was prosecuted for the abuse, allowing Jasmin to move back in with her mother.

While everything was seemingly falling into place, Jasmin still needed a way to support herself. In an effort to gain financial independence, she applied and was accepted into the Los Angeles Conservation Corps (LACC) in 2014. Jasmin initially worked on a variety of projects, but she started specializing in technical construction after just two months.

Due to Jasmin’s excellent work ethic and high level of personal responsibility, she serves as a Corpsmember Driver. She currently drives pick-up and dump trucks for LACC’s Technical Construction Team. She is certified to operate power tools and heavy machinery. Jasmin is often the only woman on a crew of men, but she always earns the respect of her peers. She currently serves as Secretary of the LA Conservation Corps Leadership Council, providing feedback to Corps staff about the Corpsmember experience. Jasmin was ultimately selected as LACC’s Corpsmember of the Year.

“Jasmin is a positive role model to her peers, an inspiration to LA Conservation Corps staff and an asset to her community,” said Denise Haynes, LACC Program Manager. “She has demonstrated excellent leadership skills while serving in the LA Conservation Corps program. Her strong work ethic and passion for the environment and the local community are exemplified by her achievements.”

Jasmin has benefitted academically, personally and financially from her experience as a Corpsmember. With the help of her AmeriCorps Education Award, she currently attends East Los Angeles Community College. She plans to transfer to Channel Island University to earn a bachelor’s degree in biology with the ultimate goal of becoming a wildlife biologist.

“We all want to be remembered for something and to be known as more than just ordinary – to strive to be more than just average, to be unique,” said Jasmin. “I want to be someone who makes a difference for the younger generation, and who stands for what is true and right. I want to help others understand that when an opportunity comes their way, it’s important to improve themselves and take it.”

Angela Noah on Building her Legacy

Kalef Jones on Leading by Example
Scroll to top