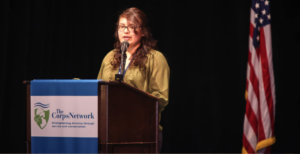 “My legacy will be reflected on as ‘the girl who did it.’ I want to be someone who my people can look up to. There are youth who are considering suicide right now; someone out there who is trying to stay strong for their mom who is being abused; someone debating whether or not to attend school the next day because they are the victim of bullying…My legacy will be to help these people, to inspire, to give hope. I want to ensure that every Native American youth acknowledges their own potential and understands that there are infinite possibilities.”

Angela Noah was senior at a Native American boarding school in Salem, OR when she found out that she did not have enough credits to graduate. She became depressed and felt as if she had failed in life. Her school counselor told her about Northwest Youth Corps (NYC) and how, if accepted by the Corps, Angela would have the opportunity to leave school two weeks early thus avoiding the disappointment of seeing the Class of 2015 graduate without her.

Desperate and hoping for the best, Angela picked up an application and applied. A week later she was hired; she and twelve other Chemawa students took the trip to NYC’s headquarters in Eugene, OR. She completed five weeks as a youth participant with NYC then transitioned into the eight week Native American Conservation Corps AmeriCorps Program.

Participation in the five-week youth crew and eight-week Native American Conservation Corps program helped Angela strengthen her leadership skills. She explains that, “Before the Corps, I was quiet and afraid that I would never amount to someone important.” However, throughout her service, Angela’s positive attitude shown through and inspired others of both lesser and greater experience to work harder and perform better. Her presence simply made everyone around her more efficient and thorough. Her words of encouragement and wisdom were always available for everyone that she encountered.

During Angela’s second session with NYC, she was the only female on a small three-person work crew. The other two Corpsmembers were twins who were extremely quiet and closed off. Following their first day of orientation, Angela reached out to the brothers and used the knowledge she gained from her previous session to help them acclimate to the routines of living and working in the wilderness. Within the first two weeks, Angela taught the boys how to set up their tents, clean up camp, and hold the correct posture when using heavy equipment.

Angela could relate to the two Corpsmembers in having grown up on a Native American reservation, thus creating a supportive network for the boy’s that no one else in the session could provide. Oftentimes the twins could not afford snacks during the weekend trips to a local store, but Angela noticed their lack of money and bought them their favorite snacks every weekend without them having to ask.

Toward the end of the session, Angela’s crew met up with seven other crews at a weekend site, and during a check-in with all of the young adult Corpsmembers, one of the twins stood up and shared his gratitude for Angela’s kindness. He expressed that one of the most influential leaders in his life was his co-crewmember Angela.

Angela’s experience with NYC helped her relinquish the fear of failure.

“All that I have gained from working the woods has given me the courage to leave and forgive,” said Angela, “I no longer pity myself, and instead I take charge and set out on a journey to inspire others that anything is possible.”

Angela plans to graduate high school in May 2016 and continue leading a crew with NYC’s Native American Summer Stewardship Program as well as Youth Corps session. She hopes to attend either Evergreen State College or Grand Canyon University in Arizona and eventually start a Conservation Corps on her reservation to help empower Native American youth.

Jasmin Angeles on being a Role Model
Scroll to top