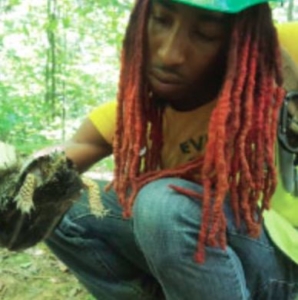 “I was taught hard skills that were needed to succeed. Today I am comfortable and confident in my forest work…I can definitely see a clearer future for myself.”

Growing up in a city, Michael Hendricks never imagined himself pursuing a career outdoors; but that’s all changed. Michael was working through a temp service before he joined Greencorps Chicago in March 2016. The nonprofit where he worked for two years had recently let him go due to budget cuts. What caught Michael’s attention about Greencorps was that it seemed so different than any other opportunities available to him.

“I had an idea about the type of work I would be doing, but I never heard of people like me doing it,” said Michael. “Jobs in horticulture and forestry sounded like something I would have to study in school for years…I liked how the Corps offered this type of training, but what I liked most was the idea that I could be on a path to a bright future in a unique field.”

Over the past six months in the Corps, Michael has earned a First Aid/CPR certification and a locally-recognized prescription burn certification. He also completed OSHA 10hr and HAZWOPER 40hr courses, and became an Illinois Licensed Pesticide Applicator. In addition to these certifications, Michael has passed Greencorps assessments in chainsaw operation and maintenance, chipper operation, invasive species identification, small engines, and brush pile burning.

Beyond new skills, Michael has developed a new sense of what is possible for him. He was part of Greencorps’ first project with the U.S. Forest Service, serving on a crew that travelled to Shawnee National Forest in southern Illinois to map and inventory invasive species. Michael earned the chance to participate in all three phases of the project, spending a total of 15 nights camped out in the forest. He was a vital member of the team that helped Greencorps build what is now a positive and growing relationship with the Forest Service.

According to his supervisors, “Michael is the definition of positive energy.” The excitement he brings to his work is contagious. He is known as someone who excels at his job, but does so humbly, and wants everyone to do just as well. Michael is known for going out of his way to encourage team spirit and make sure nobody feels left out.

Michael has also gone above and beyond when it comes to volunteer hours. He has put in more hours than any other Corpsmembers, nearly doubling Greencorps’ service requirement. Michael completed some of his service hours with NeighborSpace, a local nonprofit public land trust. When he asked the organization if there was a garden where he could donate his time, Michael was invigorated to learn there was a garden in his own neighborhood that needed help.

Michael did far more than just put in his volunteer hours. He filled out the tool lending library sheet, ordering wheelbarrows, shovels, and more. He borrowed a truck from a friend to pick up these tools. He recruited friends and neighbors from his block to help on the workday. Michael worked incredibly hard alongside a team he had assembled himself. Michael is a thoughtful advocate for his community and for more constructive opportunities for the youth of Chicago. Because of his comfort with public speaking, Michael was asked to participate in Greencorps Chicago’s planning summit, and currently participates in the Chicago Service Year Alliance’s Youth Leadership Team.

After completing his term of service, Michael wants to continue to learn and hone his skills. He has considered joining another Corps, potentially one based on the West Coast. Knowing that he is young and has a long career ahead of him, Michael wants to experiment and gain experience in many different types of projects.

“My Corps experience has opened my eyes to a world I have never imagined that I would be in,” said Michael. “Growing up in the inner city, I had never touched a chainsaw before, I had never camped before, I had never even spent any time in the woods, so the experience was completely new. Not only was I taken out of my comfort zone, I was also taught hard skills that were needed to succeed. Today I am comfortable and confident in my forest work…I can definitely see a clearer future for myself.”