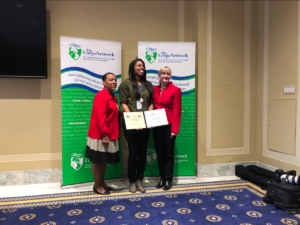 “I felt fortunate to be in that position and I wished other people I knew could be alongside me. That, along with the love I was shown, really helped me grow.  Just the thought of knowing I had so much support made me feel like I couldn’t fail.”

As the lead driver for Civicorps’ Recycling Team, Kiara Alexis has worked hard to achieve the goals she had coming into the Corps. Kiara first applied to the Corps in 2011. At the time, she was, as she puts it, “out of work and almost out of hope.” She had her high school diploma, but was looking for a training program that would help her find a path to a well-paying career. She had applied to numerous jobs, but only received a couple interviews. Newly married and with a one-year-old daughter, Kiara wanted to find a job that would allow her young family to move out of her husband’s grandmother’s house.

“I went to Civicorps to get an application and they called back quickly with an interview date. I had no idea what possibilities the Corps was about to offer me,” said Kiara. “It all sounded great, but I didn’t know how I would fit in, or if I could even last. All I knew is that I needed a job.”

But Kiara did fit in. Her supervisors say she “is an excellent team player and a quiet leader. Her positive attitude is recognized beyond the Recycling Team and the energy she brings to support her teammates is appreciated and admired by both staff and fellow Corpsmembers.”

Kiara was an active member of the Recycling Team for two and half years, receiving forklift training and her Commercial Driver’s License Permit. She took a break from the program for a couple years when she had her second child, but returned to Civicorps to finish what she had started.

Kiara obtained her Commercial Driver’s license, with both passenger and airbrakes endorsements, and has recently been accepted into the Civicorps-Waste Management Teamsters Apprenticeship Program, which is only offered to two drivers every two years. Upon completion of the program, Kiara will be assured a Teamster position, starting at $70,000 a year, plus all the union benefits. She and her family will be positioned for financial sustainability well into retirement.

Kiara has supported several other Corpsmembers in obtaining their Commercial Driver’s Licenses and permits. One thing she is known for is completing her routes ahead of schedule and immediately checking in to see who she can assist. She also takes great pride in her recycling truck and keeps it clean and shiny, which reflects well on her and on Civicorps.

Outside the Corps, Kiara tries to inspire young women and girls to be bold and brave. When she is skillfully navigating her huge recycling truck through narrow streets and collecting material from schools and local commercial districts, she has had many interactions with women, both young and old, who are impressed by her abilities and her confidence in a job that most consider only for men.

Asked about the impact of Civicorps on her life, Kiara recalls, “Every other Friday my boss would hold meetings with the staff and Corpsmemers in my department about ‘real life’ and making grown-up decisions for the betterment of our families and ourselves. I would be sitting in my seat thinking, ‘Wow! This is where I need to be!’ I knew I wouldn’t be able to get that from anywhere else. A lot of other Corpsmembers thought it was boring, but not me, I was fully engaged. I felt fortunate to be in that position and I wished other people I knew could be alongside me. That, along with the love I was shown, really helped me grow.  Just the thought of knowing I had so much support made me feel like I couldn’t fail.”

The experience of being in a space where she felt appreciated and respected has confirmed Kiara’s commitment to one day create a community center; a safe, positive space where children and families can play and learn. She says, “When you get love, it helps you grow. It is impossible not to grow.”

Kiara is taking this message to heart. She has already written a book for her children and plans to write more books to empower children and young adults and teach them to acknowledge their positive attributes. Kiara has used her AmeriCorps Education Award to help support her studies at Merritt Community College, where she is pursuing her dreams of being a writer.

Michael Hendricks on a Clearer Future
Scroll to top