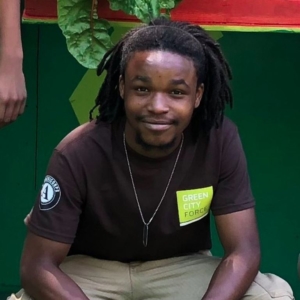 “A resilient individual doesn’t accept defeat and will always get up when knocked down. This kind of person preservers through the hard times and is at their best when they are needed most, a resilient person doesn’t have excuses. They are their own worst critic and hold themselves accountable when they slip up. A resilient person wants to learn every single day and looks forward to achieving goals.”

Justin Baker is not only passionate about doing his part to improve his community; he is a force for educating and inspiring others to also be change-makers. Before joining Green City Force in New York City, Justin worked jobs in both food service and inventory. Feeling stagnant and knowing he was capable of more, he took initiative and used past connections to enroll in a few training courses, eventually earning OSHA certification and a customer service certification.

When Justin discovered the opportunity to serve as an AmeriCorps member with Green City Force (GCF), he jumped at the opportunity. GCF recruits New York City Housing Authority (NYCHA) residents and engages them in projects that give back to their communities and NYCHA neighbors. Justin quickly became an important asset to the Farms at NYCHA partnership, a 2017 Project of the Year. Through the farm program, AmeriCorps members build and maintain six large-scale food gardens/multifunctional green spaces in the heart of low-income communities.

Since enrolling in May, Justin has been one of the most reliable and passionate members of his cohort, eagerly engaging volunteers and participating in educating farm visitors about sustainable agriculture and healthy eating habits. GCF staff rely on Justin’s ability to – with great enthusiasm and seriousness – educate all ages, from children, to young adults, to parents and seniors. “Imagine having a community farm or garden in your neighborhood – that can change the dynamic of so many things,” said Justin. “Why is this work important? Well, our health is important. Just having the youth tell people of the community, that’s how people receive it better – we’re actually the leaders right now.”

One of the reasons why Justin is such a positive influence is because he is not afraid to provide constructive feedback to his supervisors and peers. He always delivers honest and thoughtful reminders of the purpose of their work, providing much-needed motivation for 30+ fellow Corpsmembers. Though he comes from Staten Island – the farthest borough in New York City – Justin has the most service hours and has achieved one of the highest ranks among his peers.

Justin demonstrates his leadership abilities daily and is well respected by his peers. With city officials present, he represented his cohort at the launch of a new large-scale farm in his home borough of Staten Island. During his term, he has been well-received by partners, funders, and city agencies alike, all of whom are impressed with his skill and dedication. “I recently had the opportunity to accompany a select group of our Corpsembers, including Justin, to the Young Farmers Conference,” said a Green City Force staff member. “Our group was definitely in the minority, as most attendees were white, many from privileged backgrounds, and most with much more experience on multi-acre rural farms but Justin made a strong impression, moving exactly like he belonged there because he did. His professionalism, passion and drive shone. Justin actively participated and asked meaningful questions in every session, networked effortlessly, and shared his knowledge like a pro. I had people coming up to me repeatedly over the three days asking me about this stand-out young man from Green City Force.”

Justin plans to continue his community-focused mindset once he completes his service. He has aspirations to manage or help lead the Staten Island farm hub. He is also passionate about staying in touch with young people he has helped mentor. He believes communication and mentorship are extremely important and wants to do more in his community to expose youth to positivity. Justin believes our communities lack familiarity with one another and that many of our issues could be solved through better understanding and building relationships.