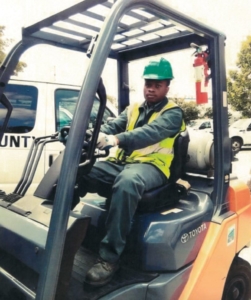 “I have learned about many new things that I hope to bring to my country, like the different opportunities that work can give you,” said Senga. “When you work hard and study, you begin to see the light at the end of the road and believe that the world has a lot more for you to see. I plan on meeting new people and sharing my story with others. I know I am not the only one with this story, but hopefully it can help others know they are not alone.”

When Senga Lukingama showed up at Urban Corps of San Diego County (UCSD), he came with a story of war and almost unimaginable personal loss. What he found was a way to channel his work ethic and his determination to, as his father had urged, get an education. Senga has explored his interest in leadership, resulting in a seat on the Urban Corps’ Corpsmember Advisory Board. According to one of his supervisors, “Senga is always proactive towards his future goals and sets high expectations for himself and works diligently to complete every task.”

Finding his way to the Corps was not easy or at all likely. When he was 14, civil war forced Senga to flee his town in the Democratic Republic of Congo. In the chaos of leaving, he was separated from his family. All alone, he walked what seemed like a never-ending road to find himself in a refugee camp. There, Senga looked tirelessly for his family, but never found them.“I couldn’t stop blaming myself for not being able to go back and find my family. I was afraid and spent many days hungry,” said Senga. “I was very sad and did not know what the future would hold for me, or even if I had such a thing as a future.”

A new life in the United States began for Senga in January of 2016. He came alone and without much direction, but found housing with the help of a community organization. “It was my first night at my new home that I realized I could finally accomplish my dreams and aspirations,” said Senga. The next day, while walking the streets and getting to know his new hometown of San Diego, Senga ran into a sign promoting opportunities with UCSD. He signed up and started to work hard to earn money and skills, and studied long hours to complete his high school education. He found a community where he could belong, and where he could be of service to his peers and to his new community.

“In the Corps, we have a lot of kids who have similar backgrounds and stories and I don’t feel alone anymore. I have been able to overcome the pictures and horrible memories in my mind and be at peace,” said Senga. “I have learned many new skills and work experience that I had never thought I would ever reach. Helping my community has always been something that I have wanted to do and I am able to help my community as well as my peers. I can drive in the city and think back at good memories of how I helped with projects around my community.”

Senga’s supervisors salute him for setting high goals and for his dedication to the program. They also note his leadership among his peers; he was promoted to a Crew Leader position. “Senga serves as a great role model to our students and shares his story with many who are having a hard time,” said one supervisor.

Senga graduates from the Urban Corps’ Charter School this December. During his time in the Corps, he also obtained his driver’s license and saved to buy his first car. He is currently enrolled at San Diego City College and hopes to eventually transfer to San Diego State University and pursue a degree in political science. His goal is to one day become a diplomat or politician. He hopes to return to his country to help to bring peace. He knows that the key to that future is through his education.

Holden Foley on Redefining his Future