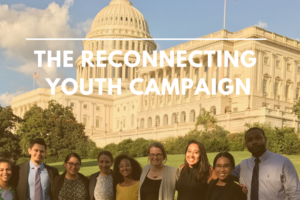 The Reconnecting Youth Campaign launched in 2017, calling on Congress to invest in America’s future by funding education, employment, training and national service opportunities for one million Opportunity Youth: young people ages 16- to 24 who are not in school and not working. We launched this campaign during a difficult time in which the president’s budget request to Congress proposed cutting billions of dollars from federal programs serving Opportunity Youth. In less than one year, the Reconnecting Youth Campaign not only helped prevent the proposed cuts, but also helped secure historic increases.

In less than one year, the Reconnecting Youth Campaign not only helped prevent the proposed cuts, but also helped secure historic increases.

This brief lays out the keys to our legislative success and offers an analysis of which programs received the funding increases, as well as information on who can receive these funds and how to apply for them. This brief was commissioned by the Opportunity Youth/Boys and Men of Color Alignment Strategy Group, since boys and men of color are significantly more likely to be disconnected than are other populations.

To read the full report, click the link below.

This post was originally published in January of 2019 and was reviewed and updated in 2022.

Eliminating Barriers to Employment: Opening Doors to Opportunity for Young ...
Scroll to top